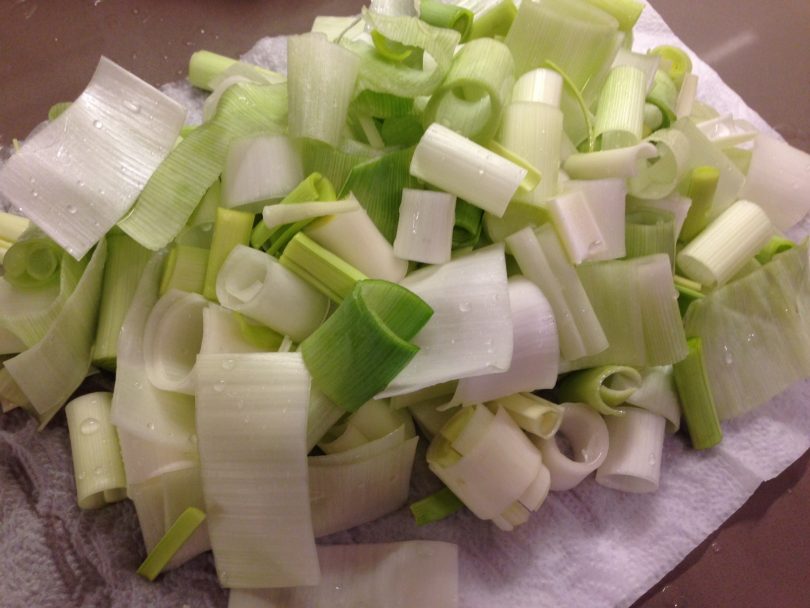 Here are the easiest methods of dehydrating leeks at home.

Dehydrating food has been used for thousands of years by humans across many cultures and countries. It remains a great way to remove the moisture from food for easy storage and for extending shelf life. In fact, once most of the moisture has been removed, most bacteria in the food cannot reproduce, making it safe to store for long periods of time without being refrigerated.

SEE ALSO: How to Dehydrate Food Successfully: A Beginner’s Guide

Preparing your leeks for dehydration

While modern technology has made dehydrating fruits and vegetables a lot easier, there are several other ways that you can dehydrate right in your own home. Leeks are part of the onion and garlic family but before you even start the process of dehydration, you need to properly prepare them first. Here are some initial steps to take before using any dehydration method:

It’s important to try and cut each section as consistently as possible so you don’t end up with smaller and larger pieces. This is because you want consistent results when dehydrating the pieces. The larger pieces may not completely dehydrate, for example.

If you happen to have an electric dehydrator, you can certainly use it as it will be very convenient. That said, there are a number of ways to dehydrate leeks.

SEE ALSO: How to Dehydrate Food with a Dehydrator

Dehydrating leeks in the oven

This is often the best method for most people. However, there are some unique challenges. You must first check that your oven will go low enough for the drying process. The best temperature is around 110 F. Any temperature over 140 F will cook the leeks rather than dehydrate the leeks. This is not what you want to do.

You should leave the oven door slightly open for better air circulation.

The other issue is that the process is going to take several hours. You will need to open up a door of the house to allow any moisture to escape and also to cool the house down a little.

The process of dehydrating leeks in the oven should take about 6 – 10 hours, depending on your oven. When ready, dehydrated leeks are crispy.

Dehydrating leeks with a dehydrator

The oven might be more convenient than letting the sun dry out your leeks but a modern electric dehydrator is even better still. These units are equipped with stacks of drying racks, fans, and electric elements.

You can much more easily stack your leeks or anything else in the dehydrator. Unlike the oven, you can use all of the available space so it’s much more time-efficient if you want to dry more than one vegetable.

You will be setting the temperature to 110 F for the drying process and the best part of it is that these dehydrators come equipped with a temperature gauge and a temperature dial so you can easily keep an eye on the drying temperature and adjust it when needed. The process of dehydrating leeks with a food dehydrator should take about 6 hours.

Sun-drying has been used for thousands and thousands of years and is the oldest method. If you don’t have access to an electric dehydrator or an oven, or you just want to explore an ancient method of drying, this is the way to go. It will take three or four days, depending on weather conditions.

Bear in mind that sun-drying is only going to be effective under the right climatic conditions. Ideally, the temperature should be a minimum of 86 degrees F and no more relative humidity than 60 percent. This is going to limit your drying, especially if you happen to live in a place that’s cool a lot of the time.

If you live in the right climate and you have a few good days of weather ahead of you, you can carefully lay out the sliced-up leeks on a mesh screen that is not galvanized. To protect the drying food from flies, birds, and other pests, you should cover it with another mesh screen.

Sun drying is a fantastic way to explore what the ancient Greeks, Romans, and other cultures did for centuries. It also explains why the ancient Mediterranean diet was high in dried dates and raisins.

The problem is that some foods are sensitive to the rays of the sun and nutrient content can be damaged during the dehydration process. This method is similar to sun drying except that you’ll be placing the mesh screens in the shade instead and away from the damaging sun. Just bear in mind that this may take a bit longer than sun drying because you’re relying on air to do the work.

Both – sun-drying and air-drying methods are perfectly fine for dehydrating leeks.

How to Store Dried Leeks

Once your dehydrated leeks have completely cooled off from the drying process, you should store them. Use mason jars or storage containers with airtight lids. This will help to keep any moisture out.

Once you’ve stored them and tightened the lid, you can store them away. But you do need to keep an eye on them for at least a few days to see if there is any condensation forming on the inside. If so, this indicates that there is still too much moisture in the leeks and you need to take them out and dehydrate them some more.

You should also place the jars into an area that is away from heat and light as this will help to extend the lifespan of the leeks. Also, use labels so that you can write the storage date and what’s inside the jar.

Dehydrating leeks is a great way to store them for another day and extend their lifespan. So why not step into the shoes of the ancients and do some dehydrating? It’s a rich tradition with a long human history.