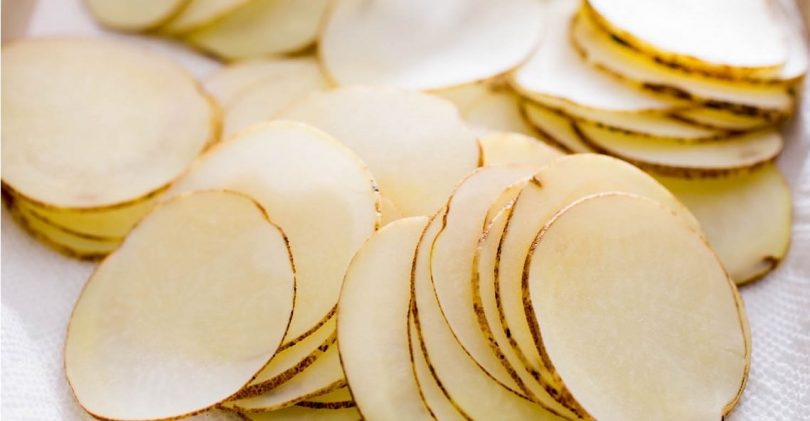 Potatoes have always been a crowd favorite. Aside from being inexpensive, there are countless things that you can do with a potato. You can fry, mash, mix into a soup, and many more. Because of this, you may want to store potatoes for future use.

Potato storage can be quite easy. That is if you have a cool, dry, dark place. But since most of the houses now are airy, it is quite difficult to find one. So how do you store potatoes? The best alternative is to dehydrate them.

Dehydrated potatoes are the best for your slow cooking recipes, for scalloped potatoes, and for stews and casseroles. They are also perfect for your camping trips and ocean adventures. So, how do you go about the process? Below are the most common ways of dehydrating potatoes and how to store them properly for longer shelf life.

In this guide about dehydrating potatoes, the following methods are covered:

Dehydrating potatoes in a food dehydrator

Dehydrating potatoes without a food dehydrator

How to Dehydrate Potatoes at Home

Dehydrating potatoes in a food dehydrator

Fresh potatoes have higher amounts of usable vitamin A, C and some B vitamins like niacin and thiamin. They also have traces of folate and vitamin K. Essential minerals like magnesium and calcium can also be found.

However, sometimes, the potatoes become black or darkened after drying.

One concern mentioned above is that dehydrated potatoes become black or darkened after drying.

The key to let the potatoes stay white even after drying is using lemon juice.

Others have also tried mixing a crushed vitamin C tablet instead of using lemon.

This method will prevent your potatoes from darkening or turning black even when exposed to air for drying.

There is also no sour or lemony taste in your dehydrated potatoes after the process.

Another way to keep the potatoes white even after drying is through blanching before dehydrating.

If you do not have a lemon juice or vitamin C tablet on hand, blanching is the best alternative method to do prior to dehydrating potatoes. It even more economical compared to the previous method.

While it is more common to use fresh potatoes to make dehydrated ones, using frozen hash browns can make things a bit easier. You can now skip the peeling and cutting portion of the process.

All the other steps for dehydration are same as of the thinly cut potatoes except:

READ ALSO: Which Food Dehydrator is Right for You

Dehydrating potatoes without a food dehydrator

Dehydrating potatoes is one of the ways to store your excess without having to compromise its nutritional value. But, what are the other ways to dehydrate potatoes if you do not have a food dehydrator?

Here are some of the alternative methods for dehydrating potatoes.

Though there are varying outcomes for different foods, sun drying is also an effective way of dehydrating potatoes.

Simply slice the potatoes thinly and put them on a baking sheet. Leave the potatoes openly in the sunny area until they are completely dried up.

Take note that this process can take up to several days. You may also put a mesh over the food to prevent insects from getting to it.

Dehydrating potatoes in the oven

You may follow through the usual preparation of the potatoes. Then, place the potatoes into your tray with a lined sheet.

Put your oven in its lowest setting and bake the potatoes to about 6 to 8 hours.

But if 6 to 8 hours is quite long for you, you may increase the heat to about 225°F for around 2 to 4 hours. Keep the oven door slightly open. Air should circulate.

Dehydrating potatoes in the microwave

Although it may take some time, you may also use your microwave oven when dehydrating potatoes. This method is a trial and error process because microwaves can have different strength and heat.

Prepare the potatoes just like when using a food dehydrator. Put them in your toaster using the lowest setting. Leave the oven toaster door slightly open to prevent condensation. The processing time varies so make sure to check the food on the toaster every now and then to check if they are ready or not.

Nevertheless, any airtight container will do.

Dehydrating potatoes is one of the best methods to store your food. It can be both fun and exciting. It can even make your home smell like cooking freshly baked potato dish. Moreover, while there are various methods to use, you may proceed to follow which one suits you best.