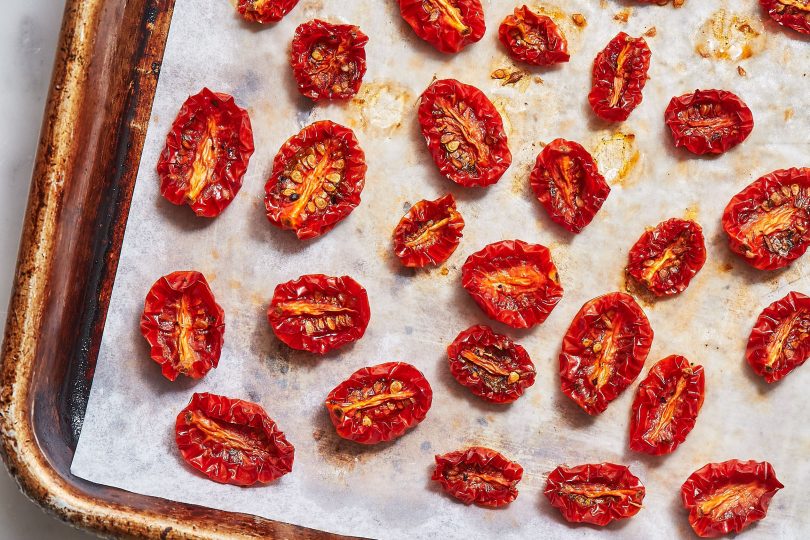 If you have a bountiful summer harvest of tomatoes from your garden, you can use one of several methods to dehydrate tomatoes and preserve them for later use.

How to Dehydrate Tomatoes at Home

Dehydrating tomatoes under the Sun

You need certain conditions for efficiently dehydrating tomatoes under the sun. You need good air circulation, consistently high temperature of 90ºF or higher, and low humidity (lower than 60%). If you don’t have these conditions in the place where you live, it is better to opt for another method for dehydrating tomatoes.

Choose tomatoes that are uniform in size so you get even results. Wash the tomatoes. Dry them thoroughly.

You have the option of removing the skin. Use a knife to make an X cut on the bottom of each tomato. Cut just deep enough to break the skin. Blanch the tomatoes in boiling water for about 30 seconds. Take the tomatoes out of the pot using a slotted spoon. Immediately transfer the tomatoes to a pot of ice-cold water. You can then easily take the skin off.

Here is a nice video about how to blanch tomatoes.

You have the option of seeding the tomatoes. Using your finger or a spoon, scoop the seeds out, leaving only the pulp. Use a paper towel for blotting superfluous juice.

After all the preparations are done, you are ready to start the dehydration process.

The tomatoes will be suitably dehydrated between 4 days and 2 weeks. The length of drying time will depend on certain factors including the thickness of slices, the juiciness of the tomatoes, humidity, and outdoor temperature.

SEE ALSO: Drying Tomatoes in the Sun – All You Need to Know

Dehydrating tomatoes in a food dehydrator

Most experts agree that using a food dehydrator is the best and easiest option for dehydrating tomatoes.

A food dehydrator gives you consistent results. Most dehydrators have a thermostat for regulating temperature so that the tomatoes can dry evenly. It has a small fan or blower that helps the air circulate efficiently. It also often comes with a timer.

Using a food dehydrator also has other advantages. You can dehydrate tomatoes even if the climate isn’t sunny. You can use the equipment in the garage, terrace, or anywhere in the house that has an electric outlet.

Expect the tomatoes to be properly dehydrated after 8 to 12 hours. Dried tomatoes will look leathery and shriveled (but not tacky). They would have reduced in size. Take them out of the dehydrator and let them cool completely.

READ ALSO: Which Food Dehydrator is Right for You

Dehydrating tomatoes in an oven

Whether you use a food dehydrator or an oven for dehydrating tomatoes, you enjoy the same advantages. You don’t have to wait for sunny weather to work on your tomatoes. You can control the temperature of your oven.

Dehydrating tomatoes in a microwave oven

Using a microwave oven for dehydrating tomatoes can be more challenging than the other methods already discussed. However, it can be done – provided you take note of several key elements:

Thank you for the image delish.com