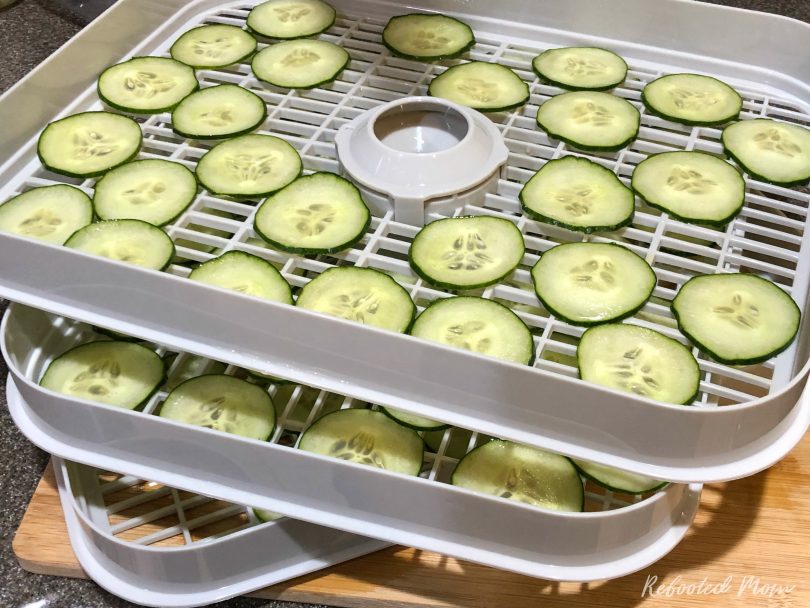 Let’s learn how to dry cucumbers.

There is no other vegetable, that’s cooler than a cucumber. Cucumbers may not have as much taste when compared to other products, but that does not mean that they do not have any benefits.

They’re low in calories, while high in nutrients, such as protein, vitamin C, vitamin K, magnesium, potassium, and manganese. These fruits have antioxidants (flavonoids and tannins), which are known to reduce risks of cancer and heart disease.

Although cucumbers are a good source of hydration and consist of 96% water, you will be surprised to know that they can also be enjoyed dry like most other produce.

Dehydrating cucumbers will come in handy, especially when the refrigerator is filled with too many fruits and vegetables to consume before they spoil.

How to Dry Cucumbers

There are three easy techniques for drying cucumbers, either by using a dehydrator itself or an oven or microwave.

Drying cucumbers in the food dehydrator

Dehydrators are a great investment since they give longer shelf lives to food, preventing things from going to waste. They also reduce the hassle involved in drying since they’re equipped with a timer.

This dehydration process will take six to eight hours, depending on the preferred consistency. The actual time it takes to dehydrate will also depend on how thick the slices are, the temperature they are set to, and many other factors.

When the cucumber slices no longer bend, they’re finally done. Remove the tray of cucumbers out of the dehydrator and leave them to set until they reach room temperature.

Store small amounts of the cucumbers in airtight plastic bags and place them in a cool, dark place for storage.

Drying cucumbers in the oven

Not all households have a dehydrator. And of course, not everyone is willing to invest in such a device. Luckily, drying cucumbers can still be done if you have an oven.

A tip to remember when drying a sheet of cucumbers is to place it on the middle rack of the oven, or if you are drying two sheets, place them in the top and bottom racks to quicken the process.

When it is time, check a few of the slices. Again, if they no longer bend, they’re already sufficiently dried. Remove the slices from the oven and let them cool to room temperature. Then, store them in sealed plastic bags.

Drying cucumbers in the microwave

While not ideal for drying produce, the microwave is suited for beginners. It gives you an idea of whether dried fruits or vegetables actually suit your preferences.

Like with the other methods, all that’s left for you to do is pack the cucumber slices in sealed plastic bags. And again, be sure to store them in a cool, dark place.

Here are some tips to keep in mind when drying cucumbers:

Since dried cucumbers aren’t really that common, you may be wondering how to eat or use them. Well, they are both healthy and delicious as a snack.

They can also be used in many dishes, all while providing a majority of the benefits a regular cucumber would have. They can be used as a crunchy ingredient in salads, pureed to make salad dressing, turned into a soup base, or even be put in smoothies.

All in all, if you often overload your refrigerator with more produce than you can realistically consume, maybe it’s time to start dehydrating those fruits and vegetables—and for something easy, start with drying cucumbers.