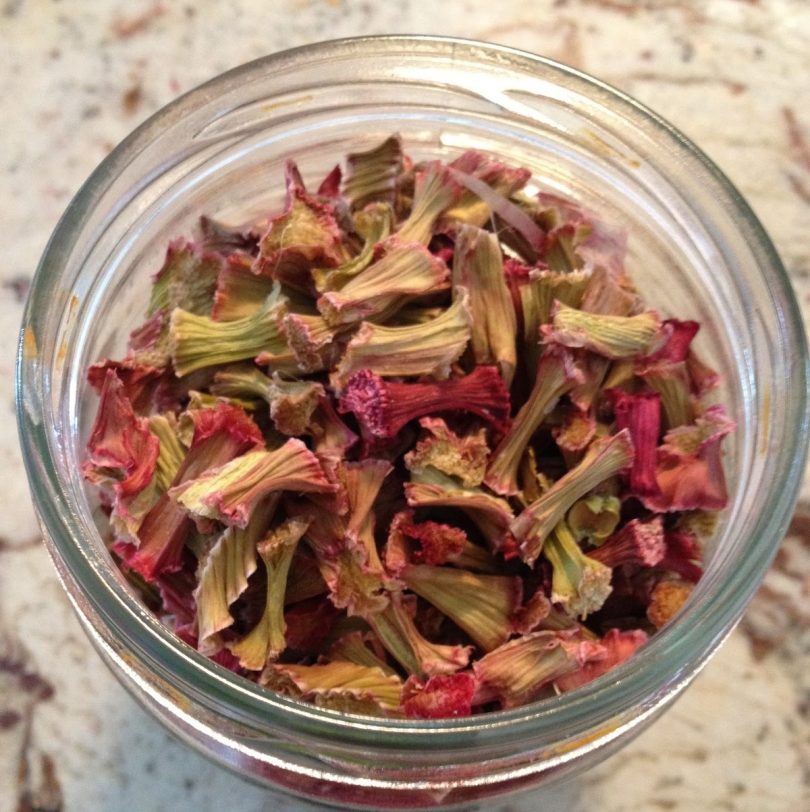 Learn easy and beginner-friendly methods for drying rhubarb at home.

Whatever the case may be – a fruit or a vegetable – you can buy rhubarb at grocery stores and farmers’ markets by the stalk, similar to celery. Harvest time is during spring, with its short season spanning the months from April to June. The stalks are known for having a bright pink color, but they could sometimes come in pale green or light pink colors.

You can only eat the stalks, as no other rhubarb parts are edible. The leaves, for one, are poisonous.

Now, if you have a lot of surplus from your garden or in your pantry, it’s a waste to just throw the tasty food away. One way to keep your excess rhubarb supply for a long time is to dehydrate and store it well.

How to Dehydrate Rhubarb – Easy Methods for Drying Rhubarb at Home

Drying rhubarb is an economical, convenient, and easy way to preserve, as well as to store the fruit/vegetable. When dried, it hardly takes up space. The best part is, it can last anywhere from 6 months to 1 year before you notice some deterioration in its color.

Most people don’t prefer dehydrating rhubarb for use as a snack food, unlike other fruits like apples and mangoes. If you don’t enjoy sinking your teeth into these tart nuggets, you can instead use dried rhubarb as an ingredient for various recipes.

Once dehydrated, you can never bring rhubarb back into the fresh and juicy produce it once was. When you soak it in water, it will just plump up but will bear a bit of chewy texture. Thus, it is best to use it in recipes, where you may appreciate the extra texture such as in oatmeal, muffins, cookies, and pancakes, among others. The longer you allow it to cook in stews or liquid, the less chewy rhubarb becomes. Thus, it is also ideal for use in sauces.

READ ALSO: How to Dehydrate Food Successfully: A Beginner’s Guide

How to dry rhubarb

Drying rhubarb is quite a simple process using a food dehydrator. You only need to cut up rhubarb into your desired size. It is often best to cut rhubarb into smaller pieces to allow for faster and more efficient drying. In case you don’t have access to a dehydrator, you can use an oven instead.

Once cut, you just need to follow the timing and temperature instructions for your particular type of dehydrator. After only several hours, you can expect to have the dehydrated products ready for storage.

Once dried, you need to store the dried rhubarb in airtight containers. Store them in a dark, cold place. These conditions are important in extending the shelf life of the product.

The following are step by step instructions on the two easiest ways to dehydrate rhubarb.

Drying rhubarb with a dehydrator

Store dried rhubarb in sealed containers. Keep the containers in a dry and dark space.

Dehydrated rhubarb will remain in good condition and safe to eat for as long as 1 year. Beyond that, it may start to change in color. If you want to preserve the color for a longer period of time, blanch the stalks for around two minutes before drying.

Drying rhubarb in the oven

If there is no available food dehydrator, you can use an oven for drying rhubarb instead.

To dehydrate rhubarb using your oven, just follow the same steps used when using a dehydrator. Only this time, you are baking the rhubarb pieces laid down on a cookie sheet in an oven at a very low temperature (minimum your oven enables you to set, not more than 200F (approx 100C). Allow the rhubarb to bake for around 8 hours or until completely dry.

While drying rhubarb using an oven is a bit more tedious than using a dehydrator, it may be worth the extra effort if you don’t mind using your oven this way. It will also allow you to save the money you will otherwise use to buy a dehydrator. This is particularly a good idea if you don’t intend to dehydrate fruits and vegetables often.

The good thing about having dried rhubarb in your pantry is that you have some within reach anytime you need to use rhubarb for the recipe you are currently preparing.

Just follow the steps below to rehydrate your dried rhubarb:

While it is not recommended to consume rhubarb in large amounts, it is useful as an ingredient in many recipes. Thus, it is a good idea to have some rhubarb in your kitchen at all times, given that it only has a short season, and you may not have access to it all year round.

Drying rhubarb in times when you have an oversupply can help ensure that you have some rhubarb to use all year round. After all, you’ll never know when you suddenly need to use it as an ingredient.

Thank you for your contribution and photo: Getty Stewart and Ollie