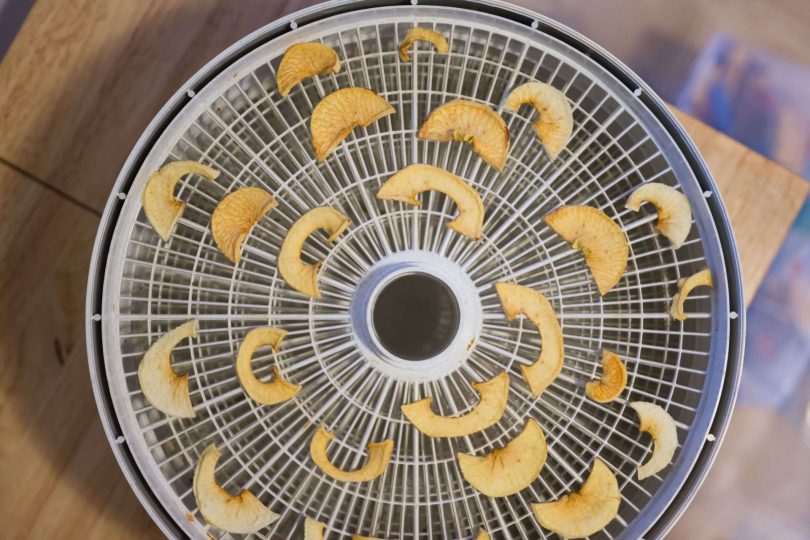 Here is a full guide on how to dehydrate food successfully.

From cost-saving to prepping, everybody has their reason for choosing to dehydrate food. Whatever your goal though, you must equip yourself with enough knowledge so that you won’t end up wasting good produce. After all, it’s only with the right techniques that you’ll be able to successfully prepare something that doesn’t just look good but is also fragrant and flavorful.

So, don’t solely rely on experimentation. Take your time and let this serve as your guide into the world of food dehydration.

How to Dehydrate Food

When it comes to drying food, the first thing you have to consider is quality. If you’re in your garden looking for “candidates” for your first batch, go for those at their peak—neither underripe nor overripe. Anything that’s yet to ripen fully won’t taste great after dehydration. On the other hand, products that have become too soft and bruise easily will have a short shelf life.

Once you’ve chosen fruit or vegetable (stick to one kind for now), you have to wash it thoroughly. You could, of course, use a commercial fruit and veggie wash if you want to be perfectly sure.

Here is a nice guide on how to wash vegetables.

If you picked a vegetable for your first attempt, you might want to blanch it before proceeding. Simply immerse it in boiling water for a couple of minutes, then put it in ice water.

That rather simple step helps keep veggies fresh-tasting if you’d decide to rehydrate them later on. The color will likewise improve, meaning your preserved produce will remain vibrant and appetizing for long periods. After blanching, dry the entire batch with a few sheets of paper towel. What’s next? Well, it’s finally time to start cutting.

To properly dehydrate food, it’s necessary to cut things thinly. There’s no need to check each slice with a ruler but aim to make everything as uniform as possible. Say you’re preparing tomatoes and you cut the first few pieces into rings, you have to cut the rest in the same way and at roughly the same thickness. Be sure to remove any bruised or discolored part though.

At this point, you’re almost ready to proceed with the actual drying of your foods—you just need to check whether what you are preparing is susceptible to enzymatic oxidation (the browning that occurs with air exposure). Potatoes and apples, for example, are quite prone to this phenomenon. To prevent it from happening, spray a small amount of lemon juice over the sliced produce.

There are several ways through which you can dehydrate those slices you’ve prepared. And, you’ll be glad to know that most options won’t require you to spend on additional kitchen equipment. What you have to keep in mind, however, is that each approach has its own pros and cons, which in turn may limit what you can realistically achieve.

Air-drying is the cheapest way to dehydrate food of any kind. All you have to do is spread out the slices on a cooling rack, which in turn will be placed in a matching oven tray. Be sure to avoid any overlaps between slices for even drying. Once you’re done with that, cover the entire rack-tray setup with cheesecloth to keep bugs away.

The ideal place for drying is somewhere that gets a lot of sunlight, has a nice breeze most of the day, and has minimal humidity. Even in ideal conditions though, the entire dehydration process will probably take a couple of days—with fleshier, juicier produce taking longer. Also, don’t forget to flip the slices at least once daily.

With that said, the downsides of this approach finally become clear. Despite not requiring any investment money-wise, you’ll be spending quite a bit of time checking on your fruit or vegetable slices. If you need things dried quickly, air-drying isn’t an option either. Most importantly, you can only do it successfully if you live somewhere with the right climate. 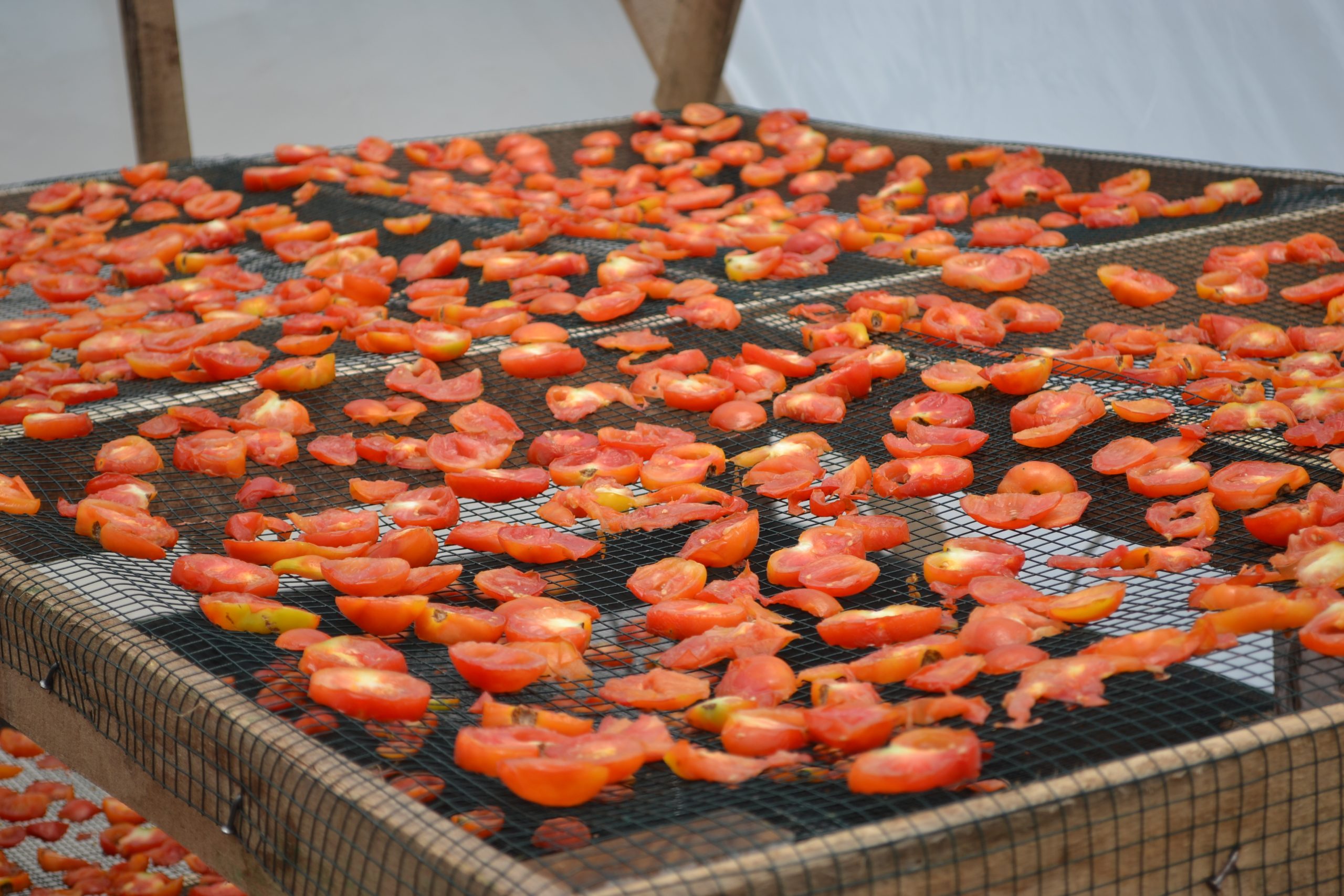 How to dehydrate food in an oven

While it entails additional expenses, dehydrating food using a conventional oven is a lot faster than air-drying. The process is almost the same though, as you’ll still have to carefully arrange slices on a cooling rack that will then be placed on a baking tray. After you’re done with that, set the oven to a minimum temperature – anywhere from 50C to 100C (120F to 212F) – as low as possible for herbs, a bit higher for vegetables and fruits.

Put the tray on the middle rack and check the temperature from time to time using an oven thermometer. If your oven isn’t equipped with a fan, you will have to open the door a bit to let moisture escape and maintain the right temperature. Assuming that you cut your fruit or veggie into ¼-inch slices and it’s low moisture to begin with, drying will likely take an hour or two.

Now, it’s time to talk about the limitations of oven drying. For one, as you’ve learned, keeping the right temperature isn’t as simple as setting the dial—occasional checks are a must. Another problem lies in the time needed to dry food. Although faster than air-drying, the process could take up to a day if, say, you’re working on a batch of moist tomatoes cut into half-inch slices.

How to dehydrate food with a dehydrator

Food dehydrators are essentially mini convection ovens. But unlike their bulky counterparts, these devices are easier to store, require a lot less energy, and are much safer. In addition, food dehydrators come with their own drying racks that allow multiple batches to be properly dried all at the same time.

What’s more, you wouldn’t have to check back too often. While it still depends on the specific model you’d end up buying, it’s almost guaranteed that it’ll come with a guide where specific details on temperature and duration are provided for each type of produce. Recommendations on thickness are usually included as well.

Given how convenient and straightforward this option is, it’s perfectly fine to think that there’s a catch. Well, a basic food dehydrator that’s mostly plastic and has at least four trays costs anywhere from 40 to 60 USD. Those at the higher end will probably set you back at least 150 USD. So, these machines aren’t really for people who are merely curious about drying.

Here is a full guide on how to dehydrate food with a food dehydrator. 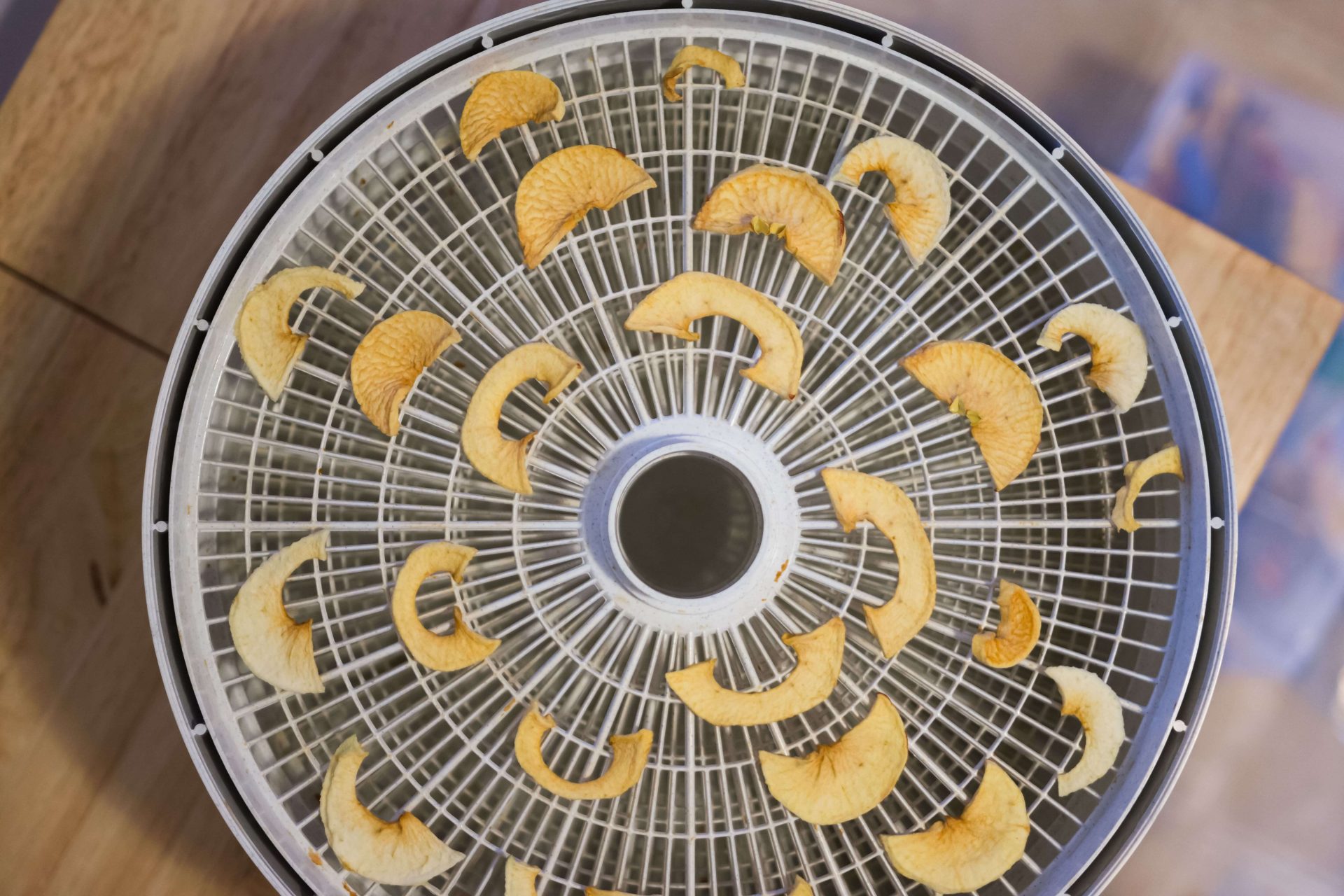 When is food sufficiently dried?

While things like pliability depend on your preferences or the food’s intended use, dried food shouldn’t contain more than 20 percent moisture. To check if the slices you made were dried enough, cut a piece open—there should be no visible sign of moisture. You could also press on it with your thumb. It shouldn’t feel sticky and no moisture should appear on the surface.

The best foods to dry

You’re finally ready to dehydrate food on your own. But, if you’re having a hard time choosing among the things in your backyard as well as from those you can purchase from the nearest market, you should probably check out this list of recommendations. Here you’ll find some favorites that many have successfully dried on their first try.

If you’re looking to enjoy sweet yet healthy snacks at any time of the day, you should probably go for either apples or bananas. Pineapples, pears, and peaches are great options as well. Do you want to serve seasonal fruit like melons and mangoes all year round? That, too, can be made possible through dehydration.

When it comes to vegetables, you actually have tons of choices. Popular picks like carrots, tomatoes, and squash dehydrate well. Some can be transformed into low-calorie chips. A few great choices include celery, kale, and turnip. If you often buy lots of mushrooms, why not dehydrate them as well? It’ll make them more versatile, aside from extending their shelf life.

But, what about dehydrating meat?

Isn’t jerky simply dehydrated meat? Well, the answer isn’t that simple. Although there are people who’d recommend cutting lean meat into thin strips, removing any remaining fat, seasoning the strips, and then dehydrating them (similar to what’s done with produce), there’s the risk of not killing off microbes such as Salmonella and Listeria.

These harmful contaminants are often capable of surviving the temperatures used for dehydrating. So, if you do decide to dehydrate meat, you have to put an additional step before or after the drying process. And yes, that’s the part where you’ll actually cook it.

How to Store Dehydrated Foods

Allow the dehydrated food to sufficiently cool down before storing it in a clean, airtight container. This prevents moisture from building up inside, which could be enough to jumpstart microbial growth. Also, be sure to keep the container away from direct sunlight—or more specifically, put it somewhere that stays cool throughout the day.

Most dehydrated foods last up to 12 months when dried, though shelf lives do vary depending on their moisture and sugar content. The same applies to meat, but some could last for half a year assuming that they’ve undergone additional cooking procedures (e.g. curing, smoking). Stashing dried food in the fridge isn’t recommended given the possible exposure to moisture.

How to Store Dried Vegetables

How to Store Dried Fruits

How to Store Dried Herbs

Now that you know the basics, the only thing that’s left for you to do is to start to dehydrate food. And as you gain experience, you’ll discover firsthand the many possibilities that this practice brings. But rest assured that right from the start, you’ll enjoy a much longer shelf life for the most basic things in your kitchen while expanding your selection of food all year round.